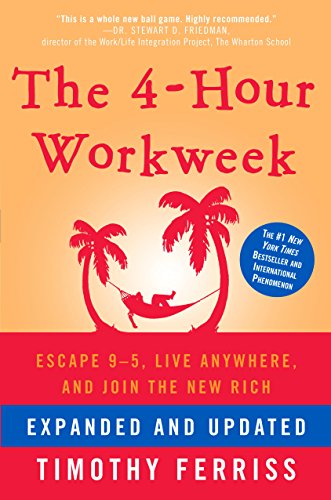 The 4-Hour Workweek was a unique book which changed my perspective on many things and opened my mind to a world that previously never knew existed. I first heard about it many years ago, when my parents were recommended they purchase it; of course, they bought it, but never bothered finishing it. It surfaced years later when I was browsing the world of productivity YouTubers; when watching their signature videos on "Books that changed their life," I noticed something. Every one of them had unique lists except for one book. As you may guess, that book was Tim Ferriss's masterpiece.

I decided that I would read this book no matter what, simply due to the near cult following it has maintained with those I respect on the internet. When I first opened it up, it instantly resonated with me. The ideas it presented cemented thoughts that I've had for years, on materialistic values and the direction of the common life script. It discussed the so called "new rich" and the differences between them and the members of the past. After this introduction, I was excited to dig into the rest of it, as it bragged unbelievable outcomes and results. I was curious to see how it all could be done.

The first chapter, D is for Definition, followed its name and defined the clear cut differences in mindset between the new rich and the deferrers. This clued me in to the goal of this book, to escape what has been perpetuated our entire lives. However, I was still skeptical. It presented several, grandiose claims; how could any of it be truly doable? Sure, someone like Tim Ferriss, Princeton graduate and energy-supplement extraordinaire could pull it off, but that doesn't mean that me, the average Joe, could somehow make an automated stream of revenue so that I can live all around the world and have no worries.

The next chapter, E is for Elimination, had the most profound effect on me. It presented ideas such as Parkinson's Law (work expands to fill the time allotted to it) and the Pareto Principle (80/20), ideas I had heard from videos before, but never explained as well as in this chapter. After reading, I immediately evaluated my time wasters and consumers and began to slowly deconstruct my day and how to best optimize it. This chapter was one that I could apply the day after reading it successfully, so it was very useful.

A is for Automation was perhaps the least useful chapter for someone like me; yes, it's incredibly important for someone who owns a business, but for a student who doesn't have any nonessential remote work for an assistant, it doesn't really have that great an effect. It was simply a necessary tool that I could pull on in the future if I ever started my own business. It was interesting, however, and quite entertaining to see how people used international virtual assistants to permeate their lives in an efficient manner.

Finally, L is for Liberation, was the most meaningful of all; it presented ideas on travel, mini retirements, and how to truly be happy and not fall into a depression like so many people who have no purpose. Getting rid of the bad doesn't reveal the good; you have to put the good in it. This chapter inspired me to attempt to learn Hindi and explore my culture, along with exploring the idea that lifelong learning and service are the pathways to happiness in the long term.

Overall, this book is the one that started it all; the first ever productivity book I've ever indulged in, and I'm happy it was, because it lived up to it's expectations.